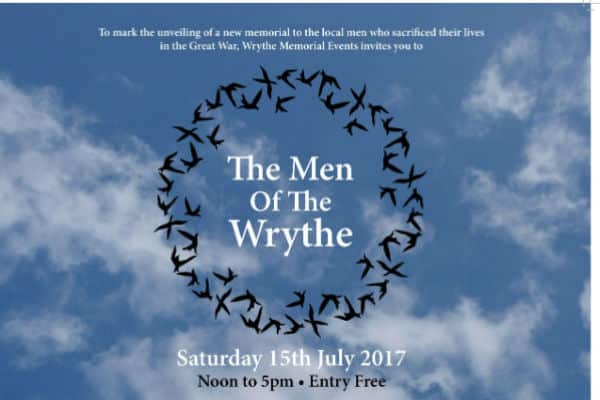 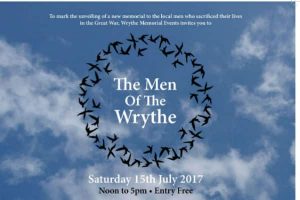 One of the largest community events to be staged in the borough this year will take place in the Wrythe area of Carshalton on Saturday July 15. It marks the unveiling of a new memorial to commemorate the local men that sacrificed their lives in The Great War.

Everyone is invited to attend a unique remembrance event to honour ‘The Men of the Wrythe’.
“This will be a fitting tribute to the 245 soldiers that signed up to serve in WW1 from just four streets on the Wrythe: St Andrew’s Road, St James Road, St John’s Road and William Street,” said Chair of Wrythe Memorial Events, Dick Bower. “In those days, the Wrythe was an ‘outlying portion’ of Carshalton village with 195 tiny cottages, occupied by very large and poor working families. They had no running water and had to use a communal pump. There were five small shops, one public house and two beer houses and cows grazed in the fields where the petrol station now stands.”

Many of the men did not return and 45 of those who died will be commemorated by a new cross to be unveiled on the Wrythe at a public ceremony on the morning of 15th July, thanks to the initiative and commitment of the St Helier, The Wrythe and Wandle Valley Local Committee.

“The event has been arranged by members of your local community. We should like to thank all the performers and stallholders for their support. We want to pay tribute to the men whose names appear on the cross. Please help us to honour their memory and make this a day to remember,” Dick added.

Programme of the day’s events
All the events will start at 12 noon and finish at 5pm.

Join us in the marquee on Wrythe Recreation Ground for:
o 12:00 Band of the Surrey Yeomanry
o 12:45 Songs from around 1917, performed by ‘Songs on Wheels’
o 13:30 A talk by local author and WW1 researcher, Andrew Arnold
o 14:15 Retro tunes from twin singers, Rob and Anthony Scales
o 15:00 A big band from the Surrey Yeomanry
o 15:45 The Impromptu Choir
o 16:30 Musicians playing tunes popular 100 years ago

On the Rec you will also find the Carshalton Charter Fair for 2017, a traditional-style Punch and Judy show for children and vintage children’s games run by the Circle Residents’ Association near to the children’s playground at the top of the park.

Other must-see attractions are: an exhibition of the Circle Library’s Research on the Men of the Wrythe, and a specially commissioned sculpture of a war veteran and display of poppies by Hackbridge Primary School.

Also on offer are free guided walks round the Wrythe, led by local historian John Phillips, to point out sites of historical interest. Ask at the marquee for further details.

Refreshments will be on sale. A special attraction is a vintage beer, brewed for The Hope according to a genuine 1914 recipe from Page and Overton, the brewery that supplied The Cricketers, the pub that used to stand on The Wrythe.

At Carshalton High School for Girls you can see the world première of The Roughs of the Wrythe, a new play by Ann Pattison (Chair of Sutton Writers), based on research carried out at the Circle Library and directed by Dick Bower (President of Sutton Amateur Dramatic Club). Performances will be held in the school hall at 1:30pm and 3:30pm. Tickets for the play, price £2, are available on-line at tickets for the show are available at www.roughs.eventbrite.co.uk or from The Hope, Wrythe Newsagents and, on the day, a stall on the Rec. The ticket price includes a souvenir programme.