Local business Sutton Community Farm held their biggest ever Harvest Festival on Saturday 15th September! Over 450 guests from the local community joined the party to celebrate this years harvest, and all the hard work of the volunteers and staff.
Visitors to the farm enjoyed a festive, colourful and friendly afternoon. Highlights included:
● 1.5 tonnes of squash was harvested by visitors! The squash crop was ready to harvest
earlier than usual this year due to the unusually warm summer.
● 200 delicious pizzas were cooked in the wood-fired cob pizza oven, featuring Sutton
Community Farm vegetables including cherry tomato passata and roasted green peppers
● Chefs from Petershams Nursery barbequed “Candy Roaster” squash grown on the farm and served up with tasty beef kofte and chilli salsa
● Farm tours with the growing team highlighting what the farm grows and the organic principles used to protect and enhance the local environment
● Live music from the local Zero Carbon Band and a ceilidh dance hosted by The Dirty Aprons
● Mayor of Sutton, Councillor Steve Cook and Mayoress Pauline Cook attended, and met staff and volunteers, along with local councillors Moira Butt and Tim Crowley
● Wallington Animal Rescue raised £180 at their stall to support their work rehoming local pets
● A raffle with prizes from local businesses such as Shinner and Sudtone, Noah’s Health
Food Store and Gipsy Hill Brewery
● Games including sack race, tug of war, and a veg and spoon race!
Money raised from the event will support the farm’s work in the coming year. The purpose of the farm is to provide a shared space for people to cultivate skills, get exercise and make new friends.
Over 40 volunteers per week visit the farm to help with growing vegetables and packing VegBoxes and to meet new people and learn new skills. The farm also hosts educational visits; over 400 school children have visited in the last year to learn about vegetables, organic food growing and
healthy diets.
Sutton Community Farm is a 7-acre farm producing over 250 varieties of vegetables and salad, which are sold directly to over 250 customers a week all over south London and Surrey via a VegBox scheme. The farm is a community benefit society, with over 400 members from the local
community who support the farm and have a voice in how it is run. 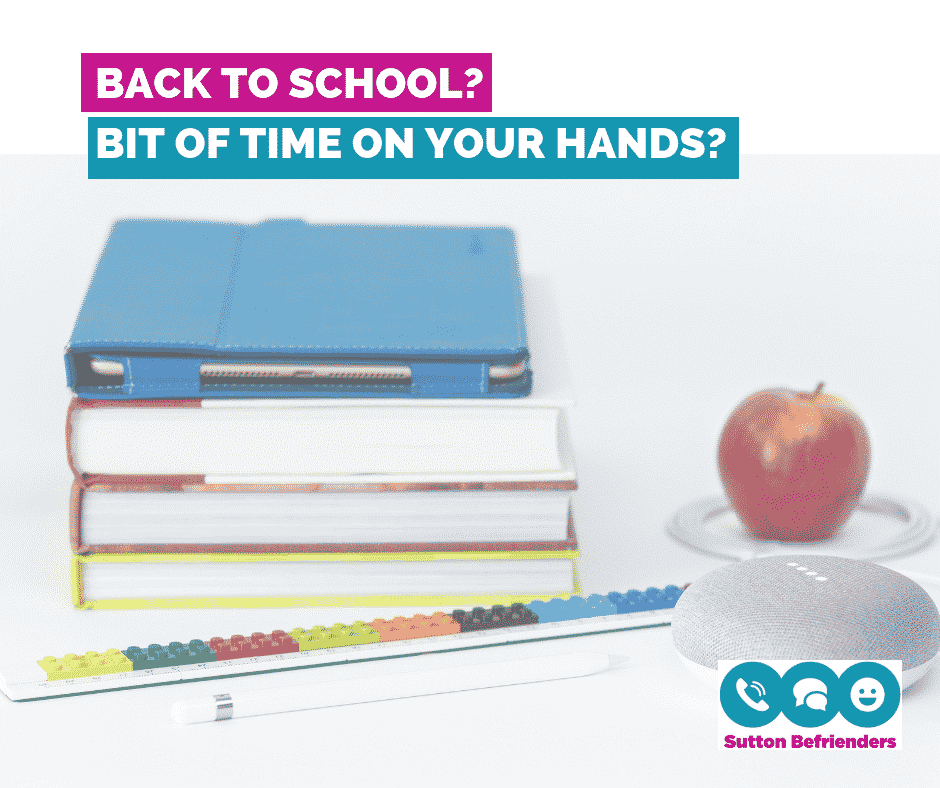 Has your child started school or gone back to school? Have you now got an hour or two to spare a week? Would you like to provide company to a lonely and isolated older person or vulnerable adult in your local community? If so, then please get in touch. No experience needed as training will be given. We just need people who are willing to help, are good listeners and able to have a laugh.
Phone us on 0208 661 5910 or email befriending@vcsutton.org.uk. 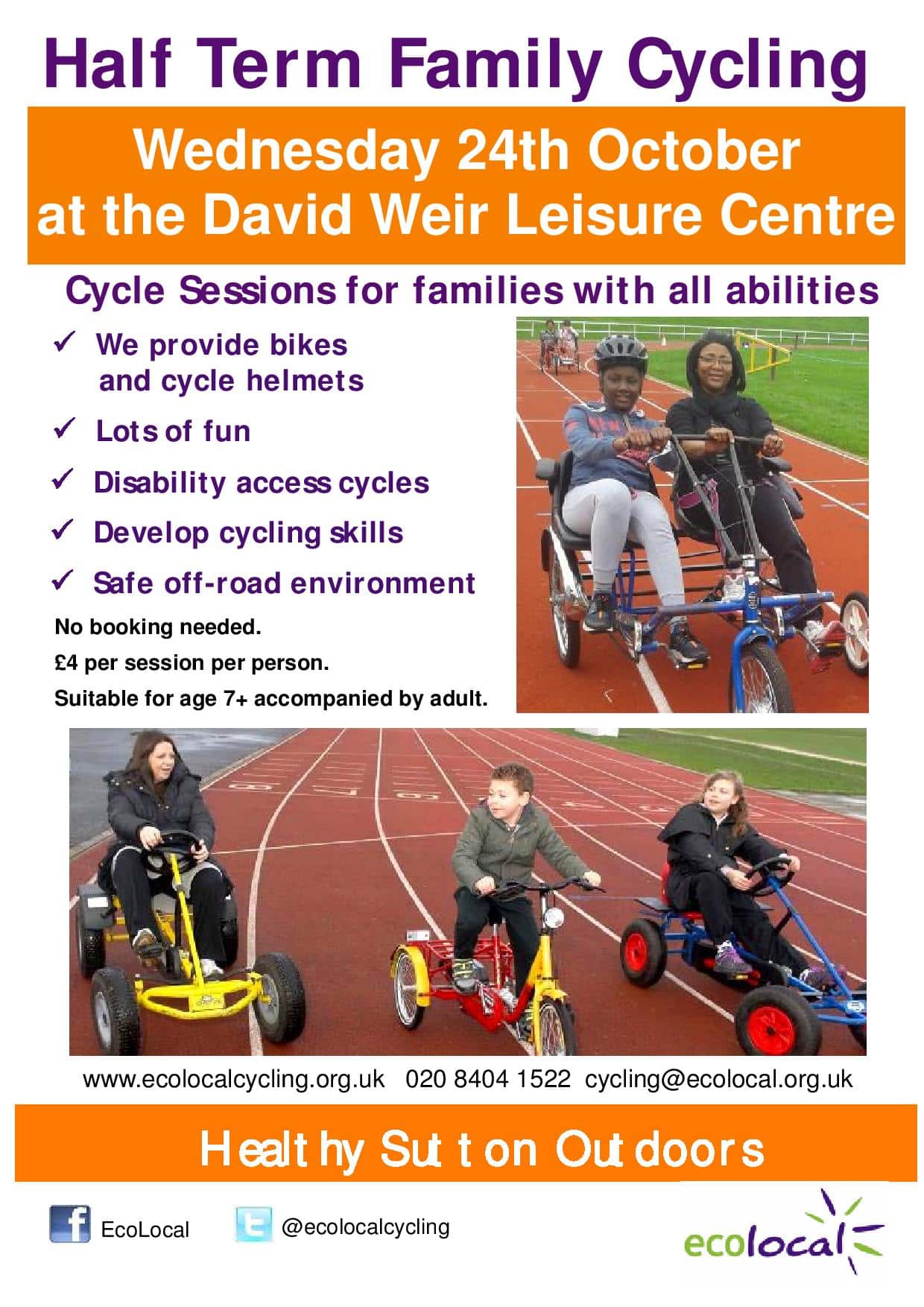 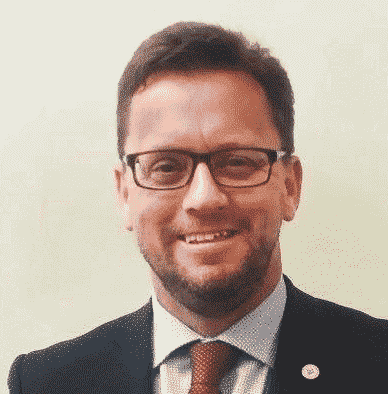 WheelPower, the national charity for wheelchair sport based at Stoke Mandeville Stadium, today announced the appointment of Rob Wilson as
their new Chair of Trustees. Rob succeeds Kevan Baker OBE who retires as Chair after more than 20 years in the role.

Former Member of Parliament for Reading, Rob Wilson has a wealth of experience and joins WheelPower at an exciting time during the 70th anniversary year of the first Stoke Mandeville Games which sparked the Paralympic Movement. Outgoing Chair, Kevan Baker said, “I am delighted to be handing the reigns of WheelPower overto Rob who is an experienced businessman and entrepreneur, being a former Government Minister with strong management, communication and relationship-building skills Rob brings the exceptional leadership the charity needs to deliver its objectives in the future.” Rob said, “I am honoured to be given the opportunity to take on the role of Chair and build on the tremendous work that the charity has done to transform lives through sport. I hope to work closely with the Board, executive team and wonderful supporters to deliver more opportunities for disabled people to play sport and be physically active. I am keen to help WheelPower deliver its vision to increase participation in sport as well as develop our facilities at Stoke Mandeville Stadium, the National Centre for Disability Sport, which has such an incredible heritage.”
Rob continued, “WheelPower is the national charity for wheelchair sport, providing opportunities for disabled people to play sport at all levels and lead healthy and active lives. My love of sport and my continued desire to make a difference burn as strongly as ever, so I’m very grateful to
WheelPower, with all its association with the Paralympics, Stoke Mandeville and Sir Ludwig Guttmann, for putting its trust in me to guide its future.”

He added, “WheelPower’s Values are closely aligned to my own and as an organisation we want to be open, innovative, forward thinking so we can inspire more disabled people to be active through our Pushing Forward strategic plan.”
Martin McElhatton, Chief Executive added, “With Rob joining as Chair it is the start of a new chapter for WheelPower and we are excited to benefit from his skills, experience and knowledge of the civil society and business to work with new and existing partners to deliver
more opportunities in the future.” 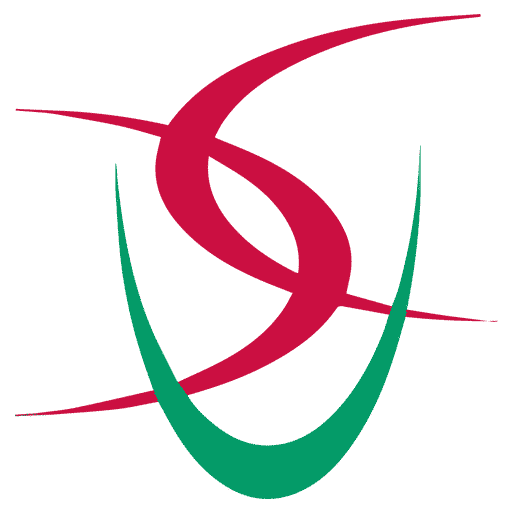 The Alzheimer’s Society is running a Dementia Community Roadshow for people to ask questions about dementia – there will be someone there to talk to.

What is the Roadshow?

Travelling across England, Wales and Northern Ireland throughout the year, our roadshow vehicles give you an opportunity to speak to one of our dementia experts in your local town, city or at a nearby event.

Whether you have a specific question or a more complicated set of needs, we aim to offer personalised advice on the day. We can also put you in contact with local and national services, as well as suggesting our award-winning information booklets for you to take away for free.

How can the Roadshow help you?

Whatever your relationship to dementia, there are lots of ways the Roadshow can help you. For example; 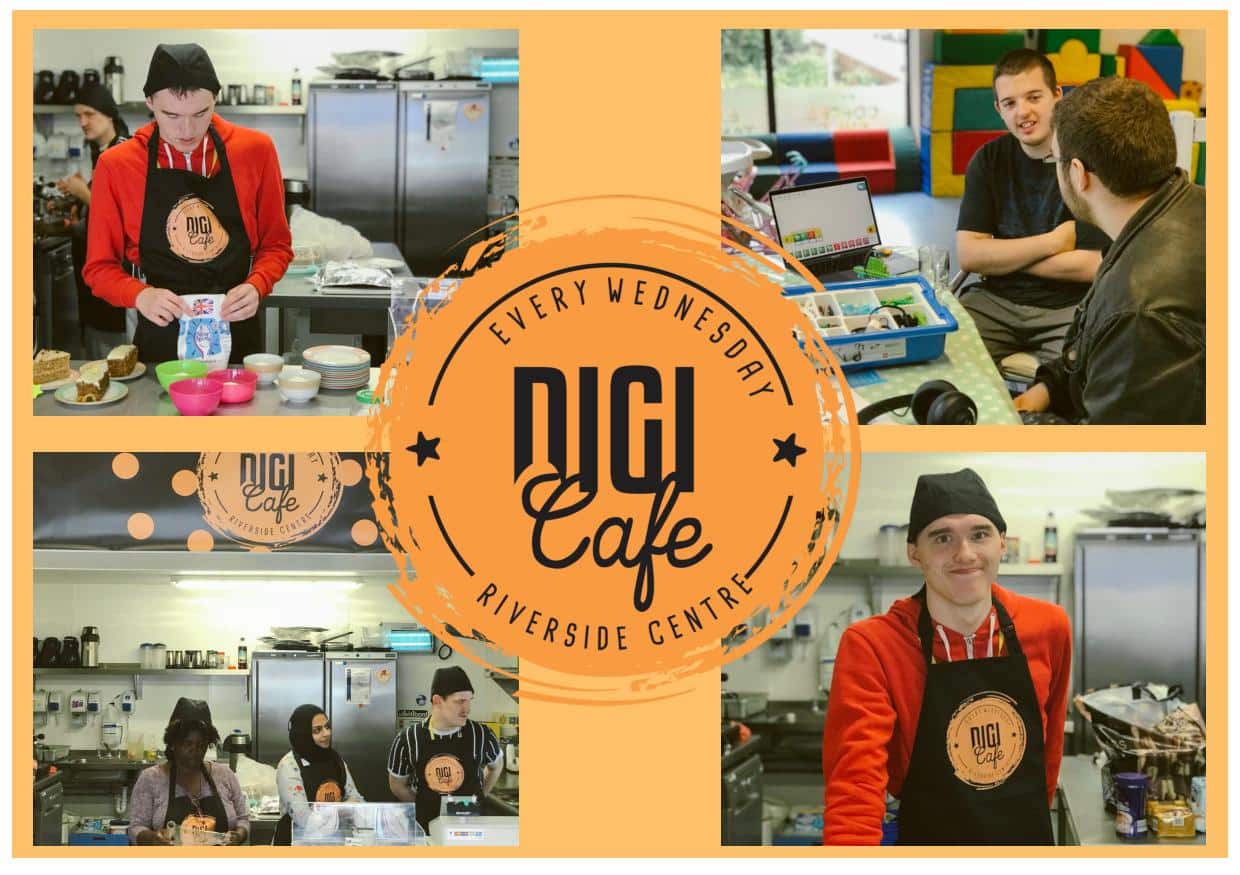 Thanks to a fantastic partnership between a college and a community centre an innovative new digital awareness cafe has been launched.

The collaboration between Orchard Hill College and The Riverside Centre  has seen the start of the digi cafe which will offer advice and guidance to any customer using the Culvers Avenue, Carshalton cafe.

There will also be the opportunity to understand virtual reality and a range of exciting and useful applications. 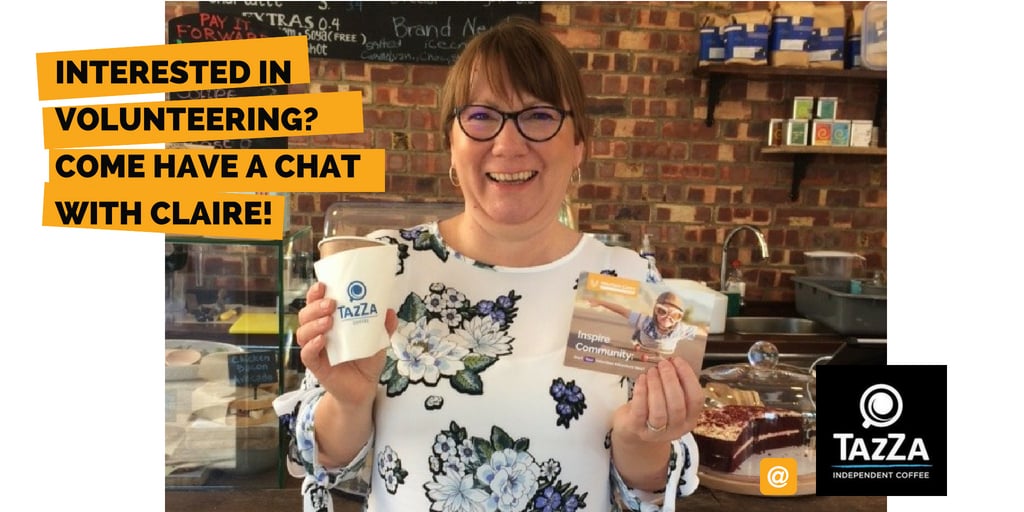 One of our members of staff,  will be at TaZza all morning and available to chat to any members of the public who are interested in volunteering in the borough. Volunteer Centre Sutton is the borough’s hub for volunteering and we work with hundreds of local organisations and charities helping them to find volunteers.

We have promoted this through our social media channels in partnership with our generous hosts at TaZza Coffee.

Elva Blacker, an artist and Sutton resident, died in 1984 but now her great niece is making it her life’s work to uncover further clues in a bid to both ensure Elva’s legacy and continue her charitable work.

As an artist, Elva was most successful in water-colour. Her prominence in the Sutton community in the 1930’s is documented, with theatrical friends such as Dame Lillian Bayliss and Dame Sybil Thorndike, which were made through her connection with the ‘Old Vic’ theatre.

Whilst Blacker was a prominent member of the Sutton community, she was also an avid traveller. In the 1950’s she spent an extended period in the United States and developed a love of creating animal portraits – a passion reflected in her lifelong vegetarianism! She even toured the Far East extensively producing landscape paintings and portraits.

However, it was her time during WW2, when she was a Motor Transport Driver and then Fighter Command at Biggin Hill that has afforded Elva such profile. During down time Elva would create portraits of personnel. As a result, she produced a record of life on an RAF station which it was hard to equal and has had work exhibited in the Royal Air Force Museum, as well as currently having work on show at Biggin Hill.

Rebecca Jones says: “Elva would have been 110 on 29th September this year and so it seems the perfect time to appeal to those who might know more about her time in Sutton or anyone who might have one of her drawings or paintings. She was a formidable woman by all accounts and ended up with the rank of Sergeant in the WAFF by the time she had finished her duties in 1946. She was most known for her fast driving of motorcycles and her kindness. The proceeds to many of Elva’s exhibitions went to the Royal Air Force Benevolent Fund, and this is why I’ve set up a web page for anyone who wants to help celebrate the life of Elva Blacker and, of course, contribute to the great work of the RAFBF.”

To share information about Elva and her life or to donate, visit: www.elva-blacker.muchloved.com 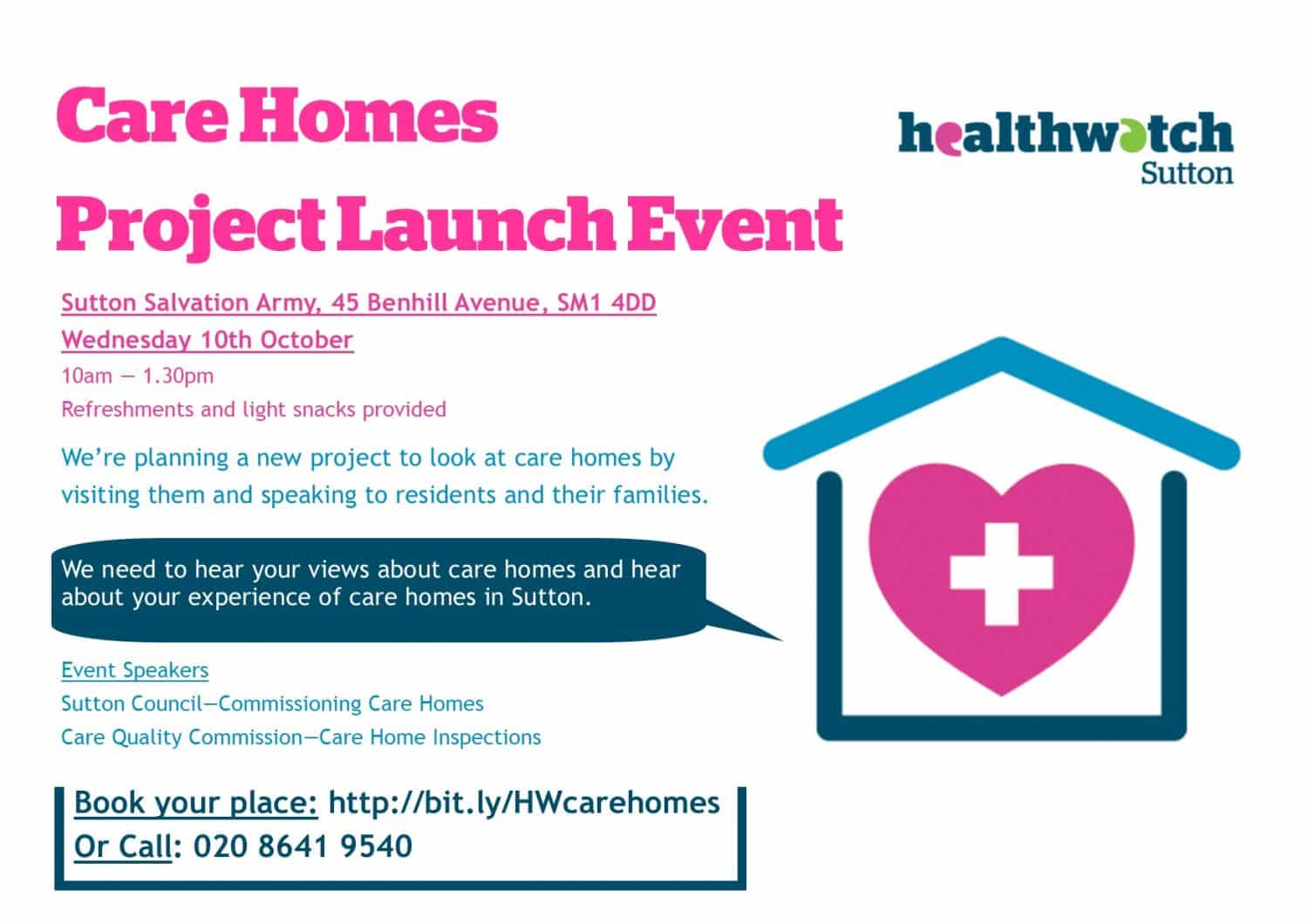 Healthwatch Sutton are asking local people to share their views around care homes at their launch event. The information gathered will be used to help form the criteria for assessing care homes that are visited when the project begins.

The launch event will be held on 10th October with speakers including Sutton Council and Care Quality Commission.

If you would be interested in attending, you can sign up to reserve a place at http://bit.ly/HWcarehomes

Healthwatch Sutton is a people champion offering a voice for patients, carers and service users working to improve health and social care services both locally and nationally.