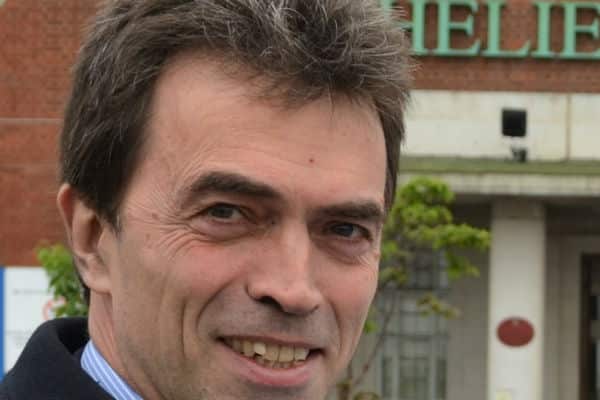 Carshalton and Wallington MP Tom Brake is again seeking Mayoral support, in a letter to the London Mayor, Sadiq Khan, for the Sutton Tramlink.

Carshalton and Wallington MP Tom Brake said:
“For years, I have been campaigning with my colleagues on Sutton Council to bring the tram to Sutton. Not only will the Sutton Link provide reliable transport for our area, it will also cut traffic pollution, create jobs, and connect residents to Merton and Central London.

“Mayor Khan’s support and influence is essential for delivering Tramlink. He must not go cold on the tram as he has done before. Rather, I urge him to throw his weight and Transport for London’s expertise behind the scheme.

The Sutton Link will provide benefits to the community, including the creation of 10,000 new jobs, regeneration of Sutton Town Centre and a reliable link between the borough and the London Cancer Hub.

In addition, the tram will improve air quality by providing an alternative means of transport to cars for many residents, an assessment that was recently supported by the Minister of State for Transport.

Warrenders Jewellers in Sutton is delighted to announce the success of its recent Charity Jewellery Cleaning Event which raised over £650 for Royal Marsden Cancer Charity.

The event, which took place over two days on the 8th and 9th of March, encouraged more than 50 people to visit the Cheam Road store to have their favourite jewellery pieces cleaned and raise money for the hospital.

Warrenders Store Manager, John Kitchener, comments. “We have been overwhelmed by the wonderful response to our Charity Jewellery Cleaning Event and how generously our customers have donated. The Royal Marsden Cancer Charity is a cause close to our hearts and we are pleased to do our bit to help continue their important work.”

The Royal Marsden Hospital is dedicated to pioneering cancer research, diagnosis and treatment. All money donated to the Royal Marsden Cancer Charity funds the outstanding care provided at the hospital and also aids research which is used in hospitals across the world.

A team from Warrenders was also due to take part in the Banham Marsden March on Sunday 10th March, which was unfortunately postponed due to poor weather. They have already raised over £1,300 in sponsorship for the walk, and are currently waiting for a new date to be announced.
To sponsor Warrenders and make a donation to The Royal Marsden Cancer Charity please visit: https://www.justgiving.com/fundraising/thesuttonsparklers
For more information on Warrenders Jewellers please visit www.warrenders.co.uk

London Borough of Sutton secondary school, Stanley Park High, is delighted to announce the launch of a new girls’ football academy in partnership with AFC Wimbledon.

The Post 16 Academy will open its doors in September 2019 and will offer a combination of full time, professional level coaching with a wide choice of academic and vocational subjects at all levels.

Stanley Park High has made a name for itself in female football with the school’s under 15s girls’ team winning the National Schools Cup in 2018 and reaching the quarter finals in 2017. .

David Growns, Chair of AFC Wimbledon Ladies said “AFC Wimbledon provides opportunities for over 300 women and girls to receive coaching and play competitive football every week. Our teams are successful, having won a multitude of cups and league championships over the years. Academic partnership is a natural progression along that successful path and we are delighted to be working with Stanley Park High.”

Mr Amit Amin, Headteacher, said: “Stanley Park High has a heritage of excellence in female football with our girls’ teams achieving great success at national level. With this in mind, we made the decision to launch a female academy and are delighted that AFC Wimbledon will be our professional partner. We are confident the combination of specialist football coaching with our academic and vocational qualifications will be a unique offer in the area.

Trial for students currently in year 11 will take on April 3rd at Stanley Park High from 5 pm.

Songs of Summer – Music for a Midsummer’s Evening

An evening of live Music at Honeywood Museum

Please phone 020 8642 4778 to book or obtain your tickets online at www.carshaltonopera.com

…Well it could happen thanks to an initiative that’s been started by the Time Out Youth.

seven five and 104 and had worked with over 150 since September of last year.

‘Skoot’ is showing the way locally.

Skoot is the name of the project and with a focus on both skateboarding and scootering, is aiming to support children and young people (of all ages!), to not only develop their skills but also have fun, enjoy something healthy, make new friends and grow in confidence. Falling off and getting back on again is all part of the fun!.

Recently several young people showed their skills at the annual meeting of the Riverside Community Association and it was “cool “.

Yes I know coming from an older person it sounds all wrong but it is the best way to describe how previously completely untrained young people confidently flick their boards into their hands, manoeuvre around obstacles, and move seamlessly from one end of the track to another.

The borough has outdoor tracks but this is indoor skateboarding and can be used as a platform on which to build not only the skill level but the self-assurance which comes from undertaking a sport safely and competently.

Three Riverside staff are now Level 1 trained, through the support of Skateboard England and Street Games and have been working in local primary schools, outdoor spaces, providing after school clubs and holiday time activities.

So if we want to make the headline come true Riverside needs support to find more volunteers to support the young people and a better venue which will give them the space to add jumps and tricks to their repertoire.

Riverside has found a ”sport wave”; which it is ahead of and they need our help to make sure they surf into offering a fantastic opportunity to our borough’s youngest talent.

So if you have a hall that you would be prepared to offer for this activity please contact Dave Lunn 020 8669 9050 or dave.lunn@riversidecentre.org