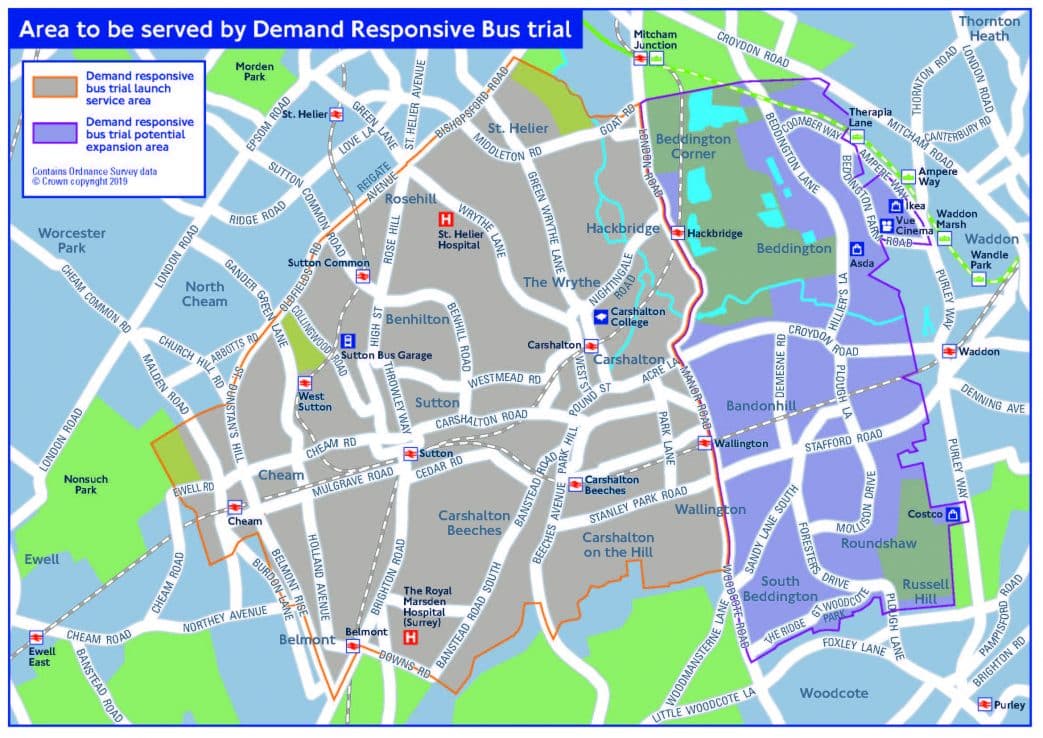 The new GoSutton bus really does go wherever you ask it!

Just finishing my coffee I pressed the GoSutton app on my phone and booked a bus (yes, you did read that correctly – booked a bus) to take me to Peterborough Road on the Sutton/Merton border. It seemed a good distance for a test and proved a good one as we negotiated the residential streets of the borough as well as its speed humps and parked cars with ease.

That sums up the borough’s latest public transport initiative – an initiative which is the first such test across the capital.

It is a bus service, but not as we know it.

GoSutton a bus because it is being tested by Transport for London and it has paying passengers and it isn’t because it doesn’t stop at bus stops, you book it through an app or by phone and you can get it to take you to wherever you want in the current area of Sutton, Cheam and Carshalton – all for the fixed sum of £3.50 for the first passenger and £2 for other passengers. Cashless.

Oh and it isn’t red – it’s a couple of shades of blue!

This isn’t just a demand responsive bus service; but so much more because it will take up to 13 people, it has free Wi-Fi and you can charge your device if you want to on your journey.

The app knew where I was and asked me to place my “pin” in my destination. This I did and immediately was told the bus would be along in three minutes and could I walk around to Sutton Post Office in Grove Road (sadly no longer a post office!). This I did and the bus duly arrived. The bus layout is like a highly luxury transit, seats are supported and comfortable and there is room for a wheelchair user. Once on we sailed passed those waiting for their buses and soon found ourselves driving a “new to me” road called Alphabet.

The perfect test  – it was crammed with parked cars on both sides littered with speed bumps one of which scrapped the exhaust. Not the drivers fault it was much higher than the others. Then we turned into our “stop” road and there I was in a residential area getting off our “non” bus.

To spare the bus underside I walked to a major road, tried the app and was told that it would be along in a few minutes. The GoSutton bus will pick up a bus stops if it can but this one was temporarily suspended – not an issue for the GoSutton. I was picked up and delivered back to Sutton Station.

The test proved the app worked, the bus worked in some difficult decisions. So go and download the app and let’s see if the borough can make this trial work.